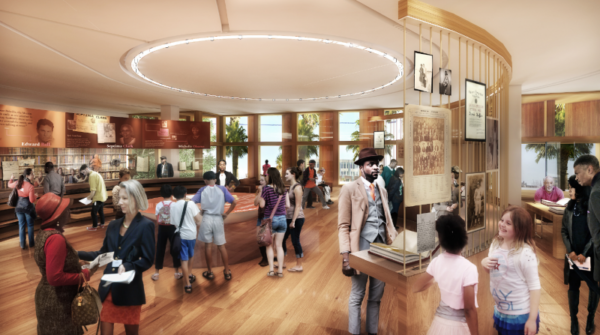 The Church of Jesus Christ of Latter-day Saints announced this week that it’s donating $2 million to the International African-American Museum in Charleston, S.C., to create a Center for Family History aimed at helping Black Americans trace their genealogy.

More than half of the enslaved Africans brought to America came through Charleston and the majority of them disembarked at Gadsden’s Wharf, “taking their first steps into this country at the future site of the IAAM,” according to the museum.

“We want to support the museum and the Center for Family History because we both value the strength that comes from learning about our families,” said Elder David Bednar of the Quorum of the Twelve Apostles of the LDS Church, who presented the donation.

“The museum will not only educate its patrons on the important contributions of Africans who came through Gadsden’s Wharf and Charleston,” he added, “it also will help all who visit to discover and connect with ancestors whose stories previously may not have been known.”

The IAAM launched an online version of the genealogical research center in 2017, providing patrons an interactive resource to help discover their familial roots. The museum touts the forthcoming center as “a one of a kind, unprecedented” research hub with special focus on African-American genealogy that is set to feature troves of archival material and historical records.

“What we’re trying to achieve is two-fold: [First,] we want to provide resources for discovering, honoring and telling your family history,” Toni Carrier, genealogist and project lead for the center, told the Charleston City Paper at the time. “The second thing that we want to do is community archiving [and] community collecting because we have the power and the resources within our own communities and the documents and oral history to preserve our community and family history.”

Martin Luther King III, son of civil rights icon Martin Luther King Jr., also spoke at Wednesday’s event and marveled at the tremendous impact he says the museum will have on the Black community. Moreover, he said the partnership between the IAAM and the LDS Chuch is an example of the “beloved community” his father envisioned.

He added: “I don’t think we can necessarily quantify what is going to happen because this is huge. What’s being done today and beyond is really huge. There are going to be so many things that develop as a result.”

King’s remarks about his father’s thoughts on a “beloved community” involving the Mormon church are interesting when considered against the backdrop of the long history of discrimination by a church that did not accept Blacks in its priesthood until 1978.

IAAM organizers said developers are slated to start construction on the new museum this summer and hope to open its doors in 2021.

The Mormon church is also a sponsor of FamilySearch International, which has reportedly been collecting records for more than 100 years now.